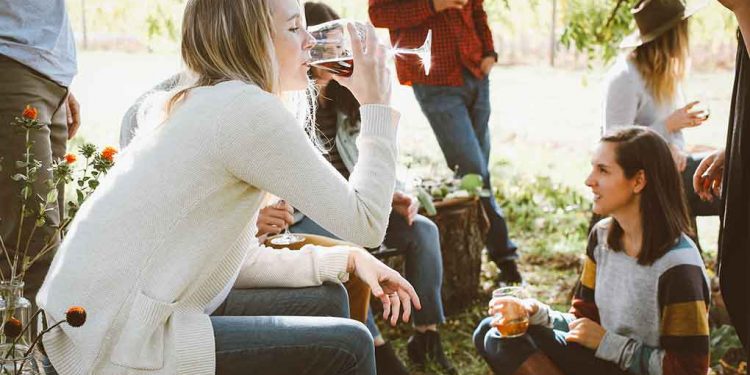 If you’re here, it’s probably because you have the question that many vegans before you have asked, what about alcohol? As a vegan, you know that sacrifice is just part of it. However, you don’t want to sacrifice everything, and alcohol is no exception. If you are interested in a vegan lifestyle, but still want to have fun with your friends from time to time, then you have come to the right place.

In this article, we will give you some background on different types of drinks, and explain whether or not they are or can be vegan.

Fortunately, there are many vegan-friendly drinks and cocktails out there, it just requires knowing what they are. There are vegan options for many types of alcoholic beverages, including wine, beer, hard liquor, and more. So if you are vegan but don’t want to give up the booze, then read on to find out how to stick to a vegan lifestyle without giving up your favourite drink.

The big question, for a beer drinker, is beer vegan? Fortunately, a lot of times the answer is yes, but not always. It is important to know why some beer is not vegan so that you can make an informed choice.

So.. why wouldn’t beer be vegan? Beer is occasionally fined using isinglass. Happily, most beer is vegan though! Isinglass is a very pure form of gelatin obtained from fish bladders(often sturgeon). The addition of a fining product simply speeds up a process which would otherwise occur naturally.

What companies make beer that is processed without vegan products?

We’ve got a long list below. But that’s not all, many other companies also use a vegan process, but we just haven’t had a chance to confirm them yet.

Keeping up to date with all the microbrews out there is especially challenging, so if you notice any drinks not on our list that you’d like to be drinking, please email us with the company’s name and contact info and we’ll investigate it for you.

Microbrewing is a huge industry today, and it is impossible to keep up with all the vegan-friendly microbrews. However, that also opens up an opportunity for you to explore! Microbreweries are very open to talking about their brewing process, and often you will get great information on some delicious vegan-friendly beers just by talking to the bartender or the brewer themselves. Discovering new beers is half the fun of microbrews, so go out and explore!

What about wine then?

Unfortunately, it seems that many wines are not vegan. It’s common to use animal ingredients in the clarification process, such as isinglass (made from fish bladders), gelatin (from animal bones), caseinates (milk proteins), and animal albumin (from eggs or dried blood powder). Non-animal alternatives include limestone, bentonite, kaolin and kieselguhr (clays), plant casein, silica gel, and vegetable plaques.

Although the list of wines we’ve confirmed as vegan is relatively small so far, rest assured that we’re just getting started and will be working hard to verify more soon! In the mean-time keep in mind that any wine that’s labeled as being “Unfined” should be vegan as well.

Don’t tell me I can’t drink the hard stuff!

What about the world of spirits and liquor? The answer is that, luckily, many types of liquor are vegan. However, as with anything else in your diet, you are best to do your research first to ensure that what you are consuming is vegan.

For the most part you can relax about your worries – the production of hard liquor does not generally involve the use of animal substances (Vodka is now filtered using birchwood charcoal instead of with bone char). Campari is not vegan though as it contains cochineal. The below list of companies whose products have been confirmed as vegan is rather small, but one can assume that hard liquor is vegan. Of course, you’ve always got to be careful of what else they may be putting into that mixed drink!

Cider has got to be vegan though, doesn’t it?

Cider seems like it should be vegan doesn’t it? It’s essentially just a fruit product isn’t it?

Unfortunately, many ciders aren’t vegan as a number of large-scale commercial cider companies use animal products in the fining/clarification process. Specifically, some companies use the following non-vegan ingredients: gelatin (from an animal-derived source), isinglass, chitin (crab shells), collagen.

Vegan ciders are usually naturally fermented in large oak barrels and allowed to settle over a period of months. Bentonite clay (mined and specially prepared for clarification purposes) or cellulose filter sheets are also sometimes used, to process cider in a vegan way.

Unfortunately, many do. They’ve been included on this list despite that, but it doesn’t mean you have to drink them! Unfortunately, a number of these companies support rodeos, bull-fighting, marine mammal captivity and much more (for example, Anheuser–Busch supports bullfighting through its Corona Beer affiliations, rodeos through Budweiser Beer, and animal captivity at its Sea World and Busch Gardens amusement parks). Many of these companies also use horribly sexist advertising. My advice? Boycott them too!

That’s all fine and good, but what if I want to get smashed while I’m out of the country?

Well.. it depends on where you are of course. Many of the beverages listed below are available in other countries. You can also find information on vegan drinking in Britain from the Vegan Society. And you can even buy your wine or champagne from Viva, a vegetarian/vegan activist campaign group there!

As you are probably familiar with through your vegan diet, you might run into products out there that you are simply not sure whether they are vegan or not.  Often, a simple google search of the product will determine whether or not it is vegan friendly. Often you will find that if a product is vegan, the company will be more than happy to brag about it.

As with anything, it is better safe than sorry, so be sure to do your due diligence on each product out there.

Hopefully though, your product is included on our extensive list below. Keep our list handy, and we will keep updating it to provide you the most extensive list of vegan products possible:

US Domestics and/or bottled in the United States

In The UK Corney and Barrow offer a good selection of vegan and vegetarian wines that are worth exploring.

This error message is only visible to WordPress admins